No matter which part of the world we live in, cricket is one sport that Sri Lankans cannot do without. Nalandians too have number of members playing Cricket in Canada. Many play for different leagues and clubs in the city and they all come together once a year to play a friendly match, against our rivals Ananadians.

The annual “Big Match” against Ananda started as a soft ball game played in a very casual manner in 1993 even before our OBA was formed. It was an idea that was discussed between Veranja Perera of Nalanda and Gamini Yapa of Ananda. The first games were played at the Pauline Park in the east. It stayed as a soft ball game until the Anandians found enough players who played leather ball cricket for their team. This 30 plus year long encounter has Nalanda leading with the most wins against Ananda.

However Nalandians started playing leather ball cricket since 1990, when a six a side tournament between Sri Lankan schools were organized by Jayantha Abeyesekera of Nalanda and Rohan Jayasekera of Royal. The 6 players who took part for Nalanda were Mahinda Athulathmudali, Nihal Jayasinghe, Ivor Boyagoda, Jayantha Abeyesekera, Veranja Perera and Rajinda Gunasena. This tournament was held only for 2 years and in the second year, Amal Wijemuni joined the Nalanda team and we progressed to semi finals losing to the St Thomas team.

The interest for Alumni Cricket had grown so much, and the recent Nalanda teams were filled with strong and talented cricketers, who had represented the school and competed in various leagues in Toronto and Middle East. We have had 3 former Captains of the school team, playing together in Canada, along with another one of their team mates. Ramesh De Silva (1989), Sudarhsa Perera (1992) & Sudham Fernando (1993) had all Captained and played together along with Chaminda Jayaweera, boasting one of the strongest Alumni Cricket team in Canada. It’s this reason that the Thomians wanted to play an annual Cricket match against us. We started playing against St Thomas since 2011 and lead them 4 to 3 in the win column against them as well. 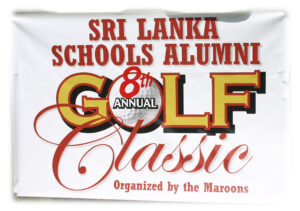 Nalandians also have some of the best golfers in Canada, who have competed and won as a team as well as individually in an inter-school golf tournament that was first organized in 2003 by 3 Anandians. They were later joined by 3 Nalandians and together as Maroons, organized this annual tournament for 10 years. The inaugural tournament was won by Royalists and the individual trophy won by Konrad Karunaratne of Nalanda. Since then Nalanda team of Rajinda Gunasena, Eknath Weerasinghe, Konrad Karunaratne, Vasantha Dassanayake, Dushy Jayasundera has won the team trophy majority of the time, and the individual trophy won by Rajinda Gunasena 7 times, including sharing the title with fellow team mate Eknath Weerasinghe twice.

There are no upcoming events.

Find your long lost friends. Our goal is to make a network for our fellow members, and organize activities that bring us together as well as to help our school in anyway we can. Currently we have over 100 members, some as far as Vancouver and the East Coast of Canada.